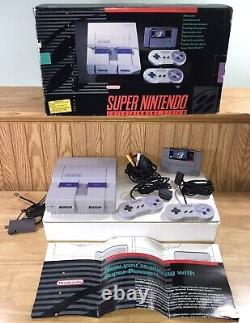 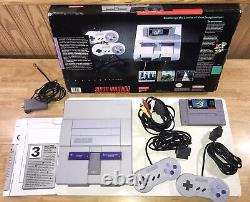 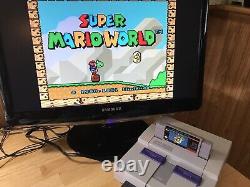 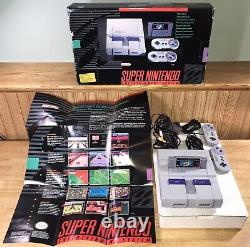 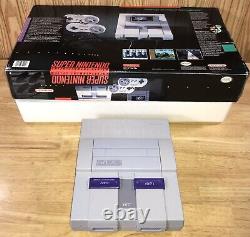 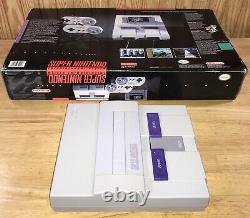 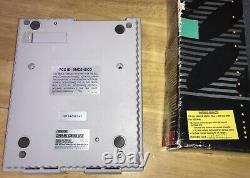 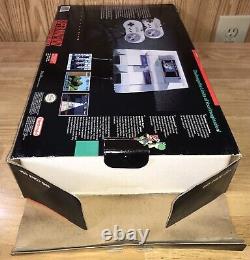 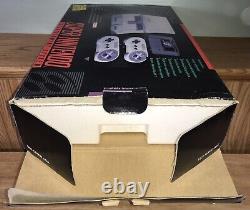 NICE 1991 Super Nintendo SNES original early release first print boxed set with Super Mario World game all in the original Nintendo retail box and white Styrofoam packing! NES system is clean and fully detailed, play tested, and ready to enjoy and display upon receipt! Great for the classic Nintendo player or collector! This is the early original style first print Super Nintendo box set with the original launch box design from 1991, later versions from 1992 that also included Super Mario World added "SUPER SET" to the box among other design changes to but otherwise contained the same contents. This early version shows "Zelda III" as the name had not yet been finalized for A Link to the Past yet.

Riginal first print early version fold-out SNES Poster (shows"Zelda III" working title as "Coming Soon", later print versions of the poster added the Link to the Past name for the game after it was finalized). Poster shows launch games on one side and quick system hook-up instructions on the other side.

Nice white original Styrofoam and the original white cardboard top cover which is often missing and most were likely discarded when new. Foam is nice clean and white color, not discolored or taped over or marked on, and not broken apart! SNES console is in beautiful condition, not yellowed or discolored, no cracks or chips, corners not split or cracked! Minor typical imperfections from original use, very clean and nice compared to most seen now which are yellowed and damaged. This original boxed set is r.

Eady to prominently display and play! From smoke-free climate-controlled environment, so no smoke or old musty odors absorbed into the box or any of the included items like many will have which greatly detract from condition and value, but of course can not be noticed from only online photos.