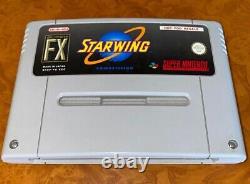 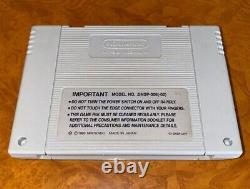 For sale I have the very rare game - Stawing Competiton, for use with the Super Nintendo console. It is the European counterpart to the competition cartridge - Starfox Super Weekend - which was made specifically to promote the launch of Starwing / Starfox. This is the English version.

The game is comprised of 3 stages, one of which is exclusive to the competition cartridges, and contains a point scoring feature which allowed players to compete for prizes such as international holidays. It is estimated that only 2000 or so competition cartridges were made, making it one of the rarest video games in existence. Is considered by many as one of the "Holy Grails of Gaming". The cartridge is in overall Near Mint condition. Please see pics However the front of the cart and label look amazing.

This item is in the category "Video Games & Consoles\Video Games". The seller is "spekkio_x" and is located in this country: AU.