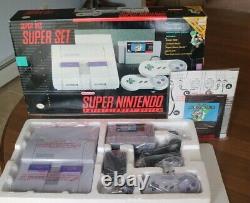 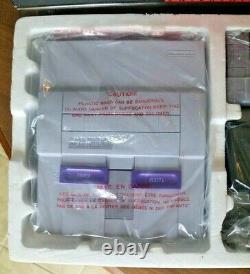 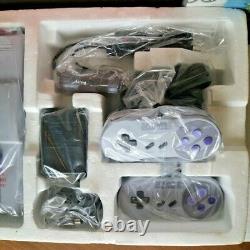 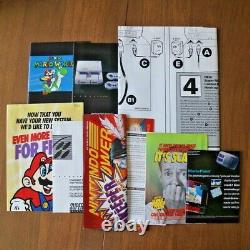 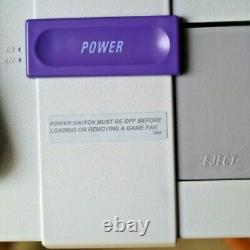 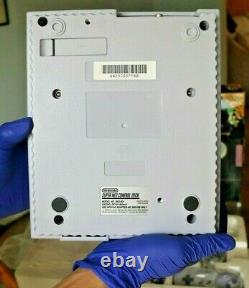 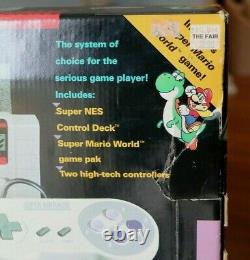 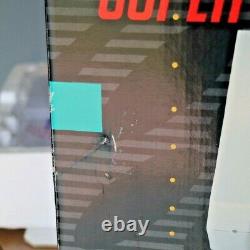 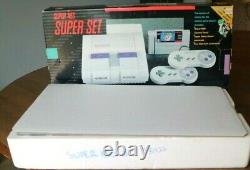 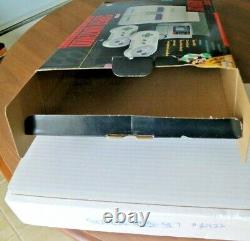 For your consideration is a never used, essentially new, complete in original box Super Nintendo Entertainment System (SNES) Super Set. The system has never been used and has, to my knowledge, only been taken out of the box three times. The controllers have never been removed from the plastic and their twist ties have never been removed. The only items that have ever been removed from their plastic baggies are the console deck and the paperwork, and they have only been removed once. The console deck and paperwork were removed from their plastic only for me to take a picture of them for this listing. All contents, and the box itself, were handled with great care and nitrile gloves were worn the entire time. This complete in original box console comes with a custom box protector.

See below for the story on how I came to acquire this SNES and where it came from. Please message me with any questions. I'll be happy to answer them. I have additional photos if you need them. It's not an easy decision to let some things go.

The Story Behind this SNES SuperSet. He was involved with a group of people who were cleaning out the house of a local collecting enthusiast who had passed away. This enthusiast was not specifically a video game collector but a collector of all things. Many of the items in his house had price stickers from a local retail store that had gone out of business called The Fair.

I was told that random items were piled up everywhere and the house was a mess. Among the piles was a collection of sealed NES games, A CIB NES Action Set, and a SNES Super Set. When I met with my contact I was very excited to see what he had. I asked if he could show me the contents of the SNES Super Set.

He was reluctant, as he believed it had never been opened, along with the other video game items from the house that were still sealed. He insisted that if anyone was going to open it, he would be the one to do it.

Upon doing so, he caused some damage to the upper right front of the box. Looking at the contents I could tell it had never been used and then I helped to very carefully put it back in the box. Fast forward to present day. On the styrofoam (pictured) you can see some writing that reads Super NES Set #81022.

I dont really know why thats there. I believe it must have been written there by employees at The Fair as part of an item tracking or inventory system.

Thats my best guess and Im not entirely sure. As far as I can tell, the contents of the box have only been removed from the box three times: once by employees at The Fair when they wrote on the side of the styrofoam, once by my contact when he showed me the contents, and once by me when I took pictures for this listing. Aside from the box, styrofoam (because of the writing) and one of the pieces of paperwork (pictured), everything is absolutely pristine! It was a difficult decision to offer this piece up for sale.

I never thought I would. Thanks for reading if you made it this far! This listing is for the complete in box Super Nintendo Entertainment System Super Set, including everything pictured, only. No other items are included. The item "Super Nintendo Super Set (SNES) Complete in Box CIB with Mario World Near Mint" is in sale since Tuesday, August 10, 2021. This item is in the category "Video Games & Consoles\Video Game Consoles". The seller is "operative09" and is located in Holden, Massachusetts. This item can be shipped to United States, Canada.