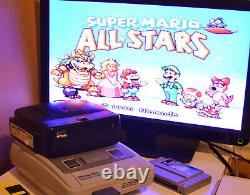 Note: This is for the Super Wild Card device only which does not come with a power adapter. You can use a power adapter that has a negative polarity DC output of 9-12 volts and 1.0-1.2 amps.

I ran it on a Japanese Super Famicom. This device has been fully tested and confirmed to be fully functioning. Up until now, the last time I used it was way back in 2002. Since then, it has been left in the box which is in good condition with all original packaging (box and plastic covering) and the original user's guide.

Like you have seen with a lot of the other listings. This unit is fully complete. Please see the video and photos below that show it fully operational and with all its original features. I bought it for nostalgia. I just loved the idea of loading SNES games from floppy disks and the technology, to me, was mind blowing when I first encountered the Game Doctor SF3 at a friend's house back in 1992/1993.

I used it on a few occasions when I initially got it. I copied a few SMC files to floppy disk, listened to the floppy disk drive load the games into RAM, and then played them.

Good times that brought back great memories! I have decided to sell it as I don't think I will ever use it again, sadly. It has been boxed up for nearly two decades. Don't miss this rare opportunity. Once it's gone, it's gone.

Don't be one of many to regret this chance to get hold of a Super Wild Card DX2 in immaculate condition, and one that has been proven to be fully functioning with a video and pictures. If you have any questions, please get in touch.

Thank you for taking your time to look at my listing. Video: Super Mario Kart ROM dumped to floppy disk and then loaded. The video will open in a new window. Note that the video looks like it freezes at 0:31, but I think that is just the floppy disk drive going so fast to prepare writing the ROM to disk. It isn't really visible, but a U. Version of Super Mario Kart is inserted in the device's cartridge slot. Sorry about the poor quality. I didn't get the focus right and I have no lighting equipment. The photos have highlighted some minor scuffs around the casing of the device. I recall them being there when I opened the box from brand new and assessing the unit. They are the results from the manufacturing stage.

The seller is "shin_shinobi" and is located in Swindon. This item can be shipped worldwide.